10th October is the 10th anniversary of the Studio Foce, the FOCE concert hall. On the occasion of the anniversary, the Tre allegri ragazzi morti band will play on 15th October at the Studio. Let’s look back together at the Studio history.
6 October 2022
—
by Silvia Onorato
Save in favorites
Saved 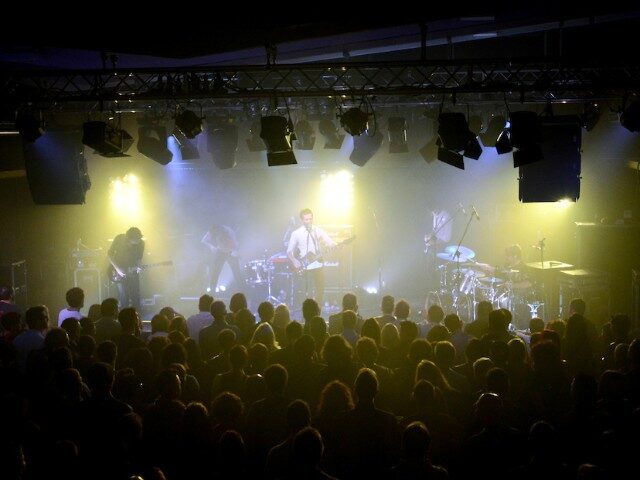 The Studio Foce is the concert hall of the FOCE, a cultural centre placed in a space at the mouth of the Cassarate river that have been promoting the diffusion of music for 90 years. Although the current structure of the FOCE dates back to 1938, a Radio studio was built on its site as early as 1932 for the first radio broadcasts in the Italian part of Switzerland with Radio Monte Ceneri (later RSI). Due to technical requirements, the original building was demolished to replace it with the current structure, designed by the architect Bruno Bossi and inaugurated on 6th November 1938. The structure remained in operation as the RSI radio studio until it moved to the studios in Besso in 1961. The building, known at that point as the Ex Studio Radio, is a technical venue and cultural meetings place: since 1962 it has hosted concerts, artistic festival, educational and musical courses, and it offered a home to the Civica Filarmonica. In 1986, it became a theatre and cabaret venue called Teatro Studio Foce, as well as a concert hall of the Città di Lugano – for instance, the then Department of museums and culture organises rock music festival and competitions there. In 1987, it became home to the Fonoteca nazionale, becoming a big library of sound documents; the Fonoteca was housed in the former Studio Radio until 2000, when it was moved to its current location in the Centro San Carlo in Besso.

At this time, “Studio Foce” was the name of the entire building. Since February 1993, it has been home to the Ufficio Attività Giovanili (Youth Activities Office), which proposes a renewed programming with the desire to address young audiences and to give space to local dance, theatre, cabaret and music companies – including the Scuola di musica moderna (Modern music school). Between 1994 and 1996, the structure saw its use triple, stimulating the search for new spaces for young people. In 1996, the musical offer was then moved to the Studio 2 in Via Brentani 5 in Molino Nuovo: a room at the second basement floor left empty by the Conservatorio internazionale di scienze audiovisive (Cisa), a former film studio with lighting and sound systems. Initially known as “youth activities hall” and later as “X hall”, the space with a capacity of 260 people offers a continuous programme of concerts and courses. Over the years it became one of the most important event places in the Lugano region, used even for parties, film festival, rehearsals and staging. In 1999, restoration works brought the capacity to 500 people, and a new name was chosen – Metrò – to recall both the underground location and nature of the musical proposal: over the years some of the most important artists of the local and international music scene have passed through the Metrò stage, such as Fabri Fibra, Corveleno, Colle der Fomento, Club Dogo, Vallanzaska, Skarface, Skastory, Harmonauts, The Di Maggio Connection, Dick Dale.
In the meantime, in 2001 the Studio Foce was renovated; at its re-opening in 2002, it was renamed “Nuovo Studio Foce”, establishing itself as the theatre home. In 2006 the Agoratega was created at La Comacina, that in 2010 moved to the Nuovo Studio Foce; in the same year, it emerged the need to move the Metrò reality from Via Brentani, due to the acoustic, logistical and disturbance in the residential area. It was therefore proposed to build a new hall on the perimeter of the Nuovo Studio Foce. The hall, which opened on 10th October 2012, was named Studio Foce – a name both new and old for a more versatile hall, which would allow ample freedom in musical, as well as theatrical and film programming. Among the many artists who have passed through the Studio Foce there are Marlene Kuntz, Tre allegri ragazzi morti, Bassi Maestro, Ghemon & DJ Shocca, i Camillas, Brunori SAS, Verdena, Marco Mengoni, i Ministri, Levante, MAXI B, Bugo, Calcutta, Ghali, Niccolò Fabi, Sfera Ebbasta, Motta, Ermal Meta, Cosmo, Mahmood, Auroro Borealo, Guè Pequeno, Inoki, Ensi.
Starting from 2012, the Nuovo Studio Foce became simply FOCE: a single name for a cultural pole that is divided in Studio, Teatro (theatre), Agorateca and Foyer.

The celebrations for the tenth anniversary of Studio Foce are on 15.10 at 10 pm, with a concert by Tre allegri ragazzi morti.
More information: foce.ch