“The market, place of perception and tradition” – Interview with the merchant of stories

Outside, the merchant of stories is a big black tent with a small breach; inside, it is a world of stories, in the middle of city markets. Let’s find out more about the project with Nicolas Joos, actor and author of radio-dramas who conceived the stories’ merchant.
29 September 2022
—
by Silvia Onorato
Save in favorites
Saved 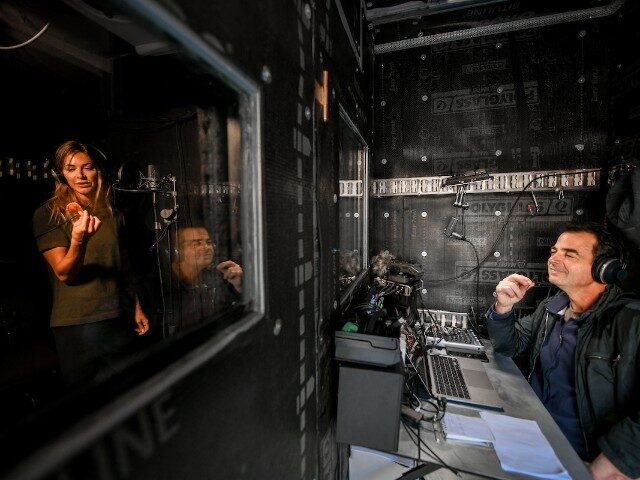 The merchant of stories is a project of sound collection of collective imagination, taking place at weekly markets throughout Switzerland. The protagonists of the initiative, supported by the Fondazione Svizzera per la Radio e Cultura (Swiss Foundation for Radio and Culture) and by RSI Rete Due, are the participants, but also goods, local products and crafts, starting point of the tales and stories. We talk about it with Nicolas Joos.

The merchant of stories, seen from outside, is a black tent with a small door. What is inside it?
Besides the black tent, there is a sign: “Enter inside your imagination. Sound experience”, written in English not so much out of Anglophilia – indeed, I value the linguistic and cultural identity of each place – but with practical intention of being comprehensible and accessible to anyone passing by. I invite participants to experience it entering their own imagination: accessing the tent, one enters a recording studio, divided into two rooms, namely the control room, with all the equipment for recording, and the real studio, with six microphones of different registration qualities. In the studio there is even a small table with various objects, which I invite participants to perceive with their five senses, in order to recognise them and “let them in” in their minds. At this point, I invite participants to invent a story of a maximum of three minutes, in which one of the objects appears – not necessarily as main character, but even as an extra – and in which something important happens, in which there is a strong emotional change. Besides a few technical instructions on how to use microphones, I leave participants completely free to improvise, to express themselves in their mother tongue (in addition to Italian, I have recorded Biasca dialect, Swiss German, English, even Arabic); in short, to have fun. I record the creative process and later add music or special effects; after a couple of days, I send the sound film to the participant.

Objects are the starting point of the stories. What kind of objects?
These are typical objects from the city market: food, natural products and crafts. At the beginning of the market day I have always asked merchants for some objects, usually five or six, which I then place on the table. Each time I receive different items, reflecting the market identity I am at. For instance, a few days ago I had a chilli peppers, a bar of soap, a necklace, a piece of cheese.

How did the project come about? Why?
It arose from a reflection on perception, memory, imagination and language. In fact, when there is a strong perception, a memory is created that is evoked by the imagination; at the same time, a single perception evokes past perceptions through memories. So, I thought to offer this experience in the market, a place rich in perception, where products are evaluated with the senses, where the aesthetic aspect of the natural products on sale, such as flowers and vegetables, stands out; but also a meeting place, full of sounds and dialogues aside from social class; lastly, a place rich in tradition: in fact markets sell products of tradition, the result of more and more perceptions over the years.
Finally, the “merchant of stories” because as a merchant I don’t produce, but I collect products (or rather stories) of others, something intangible that then I return to owners. I arrive at 5:30 am with the merchants, prepare the structure – which doesn’t go unnoticed, 7m wide x 3m high, the black colour is sometimes a little frightening, although the link with imaginary, dream, theatre is evident– and I collect a lot of imagination.

How many stories have you collect so far? What will happen to the material?
I have collected about fifty stories so far, each different from the other. In addition to stories from the imagination, sometimes I ask merchants to tell me about the market through their experience, thus collecting historical testimonies in an open dialogue about the social role of the merchant, their work and how the market has changed over the years.
I have no further purposes for the material: I send the sound file to each participant and I archive it. I find it beautiful that way, as an end in itself: it is born and ends there, so that participants have complete freedom. In the future I hope to expand the concept to art object as well, in order to have a painting, a sculpture, and ask participants what they evoke. However, I’m not interested in the technical aspect of the object, its historical features, but in its power to generate stories, in a spontaneous and improvised way

You listen to all stories. What have you discovered about people?
That everyone needs to express themselves: in fact, the merchant of stories is a game for talking, an opportunity to open up, in which not only imaginary stories emerge, but even personal facts, political and social considerations. I think that being in a snug place, in a soundproof environment, helps to enter a magical world where one loses the fear of speaking and one feels as a protagonist. Through the glass of the studio I see beautiful faces: people (adults and children) enter into the characters, they identify with the stories, they feel like actors.

The Merchant of Stories is in the city centre on 02.10, during the Autumn Festival.