“The notes I play represent an embrace” – Interview with Amaro Freitas, jazz pianist and composer

Amaro Freitas (BR, 1991) is an international icon of modern jazz music, combining the North American jazz of Thelonious Monk, Chick Corea and Herbie Hancock and the Afro-Brazilian sounds of his roots. In 2021 Amaro Freitas released his third album, “Sankofa”, accompanied by musicians Jean Elton on bass and Hugo Medeiros on percussion.
10 May 2022
—
by Silvia Onorato
Save in favorites
Saved 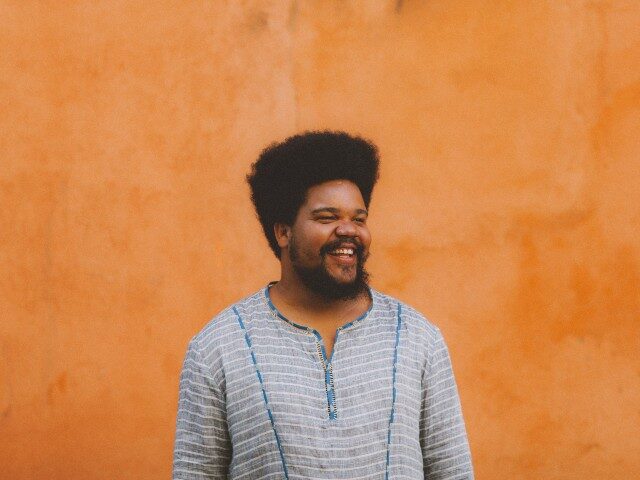 You learned to play the piano as a teenager. What role had music played in your life before that?
I used to live in a quite poor house on a hill in the neighborhood of Cavaleiro, Great Recife, with my parents and my sister. I would fall asleep listening to my parents sing traditional lullabies. I also remember playing in the yard with my father’s work tools, pretending to make bread, as my father was a talented baker. I used to play tag with my sister and my father would walk around carrying me on his back. I can’t forget my mother’s food. The best ever. I still remember its smell, that’s why I always come back home. I can’t miss it. These memories are still very strong in my mind. As my parents were protestants, we would go to the church every Sunday, attend the service and get involved with the church work. I sang with the church choir from a very early age. I can say that it brought some influence to my actual music.

What motivated you to persevere in your career choice as a musician despite some obstacles along the way?
I’ve always believed in the power of music. Alive by Chick Corea This album was recorded in 1991 at Blue Note Jazz club in New York. It was the first DVD I was given and It changed the way I perceive music. By listening to his music every single day, I was moved and started to surf the Jazz universe. It was when I learned I would make a living through music.
One great opportunity was to debut in the jazz scenario of Pernambuco at Mingus Jazz Club. It made me reach a higher level of understanding of the music as a whole. Jean Elton, bass player and member of Amaro Freitas Trio, has been a remarkable presence in my life whom I have exchanged lots of experiences with.
The process of recording my own songs in an album, performing and being part of a unique study at Montreux Jazz Academy with musicians from the world, playing with Milton Nascimento, and going on tour internationally playing in jazz temples such as Lincoln Center and Ronnie Scott Jazz Club were other breakthroughs I have had in life. I cannot forget the drummer Hugo Medeiros, my manager Laércio Costa, and Far Out Records as exceptional opportunities that made me grow as a professional musician.

Brazilian music is quite present in your music – especially, Heitor Villa Lobos. What is your relationship with tradition?
The early influence of the European religious hymns is undoubtedly included in my music. Surely, however, the heat of the region, the Indigenous, African origins, as well as the first Arabs who came to Brazil built our traditional musicality which is the base of my compositions, my pearls. A big musical influence for me is Moacir Santos. Moacir Santos is a pianist from the countryside of my state (Flores) who was acknowledged worldwide, but not so much in Brazil. Because of his African origem, he played the saxophone and, piano percussively from an Afro-Brazilian standpoint. That’s what I somehow try to bring to my music.

Jean Elton and Hugo Medeiros accompany you live and in recording sessions. How did you meet and realise you shared a similar musical sensitivity?
We’ve known each other for a long time, played together in jazz clubs in Recife, and since then we’ve shared the same ideas  and references.

Your new album is titled “Sankofa”. What does this word mean for you? How did you choose it?
This word meanss for me the connection between past, present and future. Many people came so that I could be here today, this album is a thank you to my ancestors.
I’m grateful to Tereza de Benguela Abdias do Nascimento, Zumbi dos Palmares, all my abolitionist ancestors, Mahommah G. Baquaqua, and all those who fought for the lives of black people, raising awareness for the cause and giving hope for future generations. These are some of those I would like to give a warm hug and say “thank you” for all you did for us.

The album is an exploration of afro-brazilian identity and forgotten lifestories. What were your most cherished discoveries during this journey?
I wanted to pay honor to my ancestors with this album. During its three years building process, many representative and meaningful names came up. Sankofa was the last name to come up and amazingly it represented everything I had planned and thought.
One of the great most cherished discoveries during this journey was Tereza de Benguela. Vila Bela represents the embrace I wish I could give Teresa de Benguela. To embrace is very representative these days because of the pandemic. I have missed embracing my people very much. The notes I play on this music also represent the embrace even if it is without physical touch.

What’s the best part of playing your music live around Europe?
Being able to show that music is our greatest ancestor. Meeting people and have a connection through sound, generating a great flow of good energy. I love playing in European clubs and festivals, they are the best.

Last question. What does it mean for you to do jazz, today?
Jazz is a channel that allows us to organically translate our DNA into music.