The sixth Visarte Talk in 2022 will be on December 6th at the Studio Foce with the painter Mattia Barbieri.
1 December 2022
—
by Silvia Onorato
Save in favorites
Saved 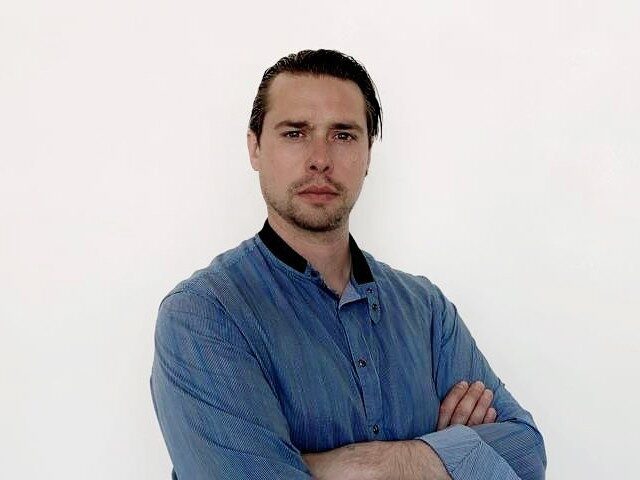 Mattia Barbieri (1985) lives and works between Milan and New York. He teaches painting at the Aldo Galli Academy in Como and at the LABA Institute in Brescia. His work is developed through painting, sculpture and drawing, from which emerges a hybrid language that sees the juxtaposition of heterogeneous elements such as the tradition of the image, mythological narratives and the digital aesthetics. Over the years, his research has been articulated in series that shows the multifaceted traits of his work in their singularity, paying close attention to both the semantic aspect of the visual grammar and the iconographic setup. Mattia Barbieri is inspired by religious art, such as medieval icons, an aspect that emerges with particular prominence in the production of recent years, which is characterized by its proximity to subjects of a spiritual nature. Artistic practice is therefore conceived as a territory in which to distort and force form and language, but above all it is the channel through which to open the portal to elsewhere. Mattia Barbieri will be interviewed by art historian and journalist Ivan Quaroni.

Painting, but also drawing and sculpture. What are the peculiarities of these three means of expression?
I think my job is a combination of a search for the sacred dimension, irony and a practice that I try to conduct with recklessness and at the same time religious silence. There is complementarity and contamination between the expressive media, even though I fundamentally believe that the painting object is the work of art par excellence, the most complex, the most magical, the most powerful. The choice of medium for me was an empathic one, as painting has always accompanied me. I like to think of the practice of painting as an action to be performed on a daily basis, as if it were an athletic discipline, a competitive gesture that has within it the sense of a challenge. A challenge that in this case turns its gaze to form, to the surface, to how the sign is articulated together with the colours and pictorial temperaments, trying to bring out that “short circuit” that makes the painting vibrant. In painting I’ve never designed anything, I like to make myself available for a moment and translate a feeling that unifies grace and grit. Sculpture amuses me. Perhaps because of its three-dimensional nature, I experience it more physically and I perceive it almost as an extension of the pictorial space. Certainly, in the operative phase I’m fascinated by how to make a line sinuous, sharp-cornered, soft or scratchy, in short, to find the appeal in the physiognomy that characterizes it. I really like the plaster because of its versatility: it can be sculpted, cast and even modelled and when the sculpture is finished the visual rhythm makes a diversification in the features evident that articulates it in a particular way. I love painting its surface to intervene again, to caress and hammer it to redefine its features, layering and removing, to make them resemble artefacts from an indefinite era. Drawing is fundamental for me, also because it doesn’t need anything but a support and a tool to make a mark, so I don’t set any quantitative limit, you can make as many as you want.  I usually draw a lot before starting a new cycle of paintings to stretch myself a bit. It gives me a sense of freedom and I perceive no margin for error. Drawing is the catalyst through which I focus on the project.

You paint in series. What inspires a series?
Each series corresponds to a period of my existence and brings with it the interests, acquaintances, contexts, experiences, … of a given moment. What inspires a new cycle is always a feeling, whether iconographic or purely tactile character (in the visual sense of the term) which then translates into the characteristics that animate the work. With each new phase I try to question again the entire search, trying to keep it active in its authenticity and broaden the field of investigation, in an attempt to show from a different point of view what I have always tried to highlight.

Your paintings show familiar-looking symbols that are given a new place, a new form. How do you choose these symbols?
The reason why I use a symbol system derives from the fact I like to think of the painting as a tool that connects the viewer with an invisible zone, an elsewhere, or in other words, the sacred space that the icon painter seeks when he creates the divine image. The painting is a portal, an object that holds a particular power within itself. In my case, the symbol arises from a union between personal mythology of mine, and what is most deeply rooted in human nature. I’m interested in the archetype, thus the liminal zone, connection, flight, fall, conquest, death, laughter, resurrection, discovery… One of the most recurring is that of the mountain, a triangle with the vertex pointing upwards which defines the vertical axis that connects earth with the sky, but also some meteorological events such as the lightning, the appearance of a sun (not only a natural sun, but also a black sun or one of other colours), the presence of the wind that becomes evident on the flags, constellations etc… all this refers to alchemical symbols, themselves linked to a process of inner transformation of man.

The representation of digital is also recurrent; one might say it is a portal within another portal.
The digital element is sometimes present in the form of an iPhone, which in this case is a window that opens up the pictorial space by proposing a further image within the painting; on other occasions, it is inherent in the graphic identity of the subjects, thus residing in their physiognomy or in the patterns stretched across the surfaces.
What I find interesting in the mechanism of representation is that at this precise moment in history I find it significant to be able to combine different types of aesthetics to create a fluid, hybrid one, combining brushstrokes and citations to the tradition of ancient painting with the lightness of digital graphics, to suggest within the same painting a temporal leap that level and unifies past and future.
In this way, the sacredness of painting that has accompanied us through the ages is aligned with the futuristic and intangible component of the digital.

Your paintings often include natural landscapes. Are they real or ideal?
They are often brightly coloured landscapes, ideal, absolutely abstract. I conceive them as an elsewhere which defines a horizon, a line in which the human realm is confined, a territory from which to enjoy heaven: the space of the sacred. At the same time, insofar as landscape is an official – and one of the most popular – genre, it also represents painting at its most picturesque and stereotypical. If on one hand it defines a sacred aspect, on the other it means for me “painting painting”, staging it even with its clichés, not without the irony that accompanies all my work.

Your paintings often host an eye. Why?
It is the divine eye.

What are your next projects?
I recently completed an exhibition at the Galleria Rizzuto in Palermo called “Santuario Tropical. In the meantime, I won the Icona Prize awarded by Verona Art Fair, which envisages the exhibition of the winning work at the Galleria di Arte Moderna Achille Forti in Verona in the near future. A number of events that will take place in 2023 are currently being formalised.

Mattia Barbieri meets the public on 06.12, from 18:30 to 20:30, at Studio Foce. Possibility to follow the meeting in Live streaming.
More information: foce.ch