“The story of a real woman” – Interview with Angela Dematté, actress

“Etty Hillesum. Cercando un tetto a Dio” (“Etty Hillesum. Seeking a roof to God”) is a play based on the last three years of Etty Hillesum’s life. We meet the lead actress, Angela Dematté.
2 November 2022
—
by Silvia Onorato
Save in favorites
Saved 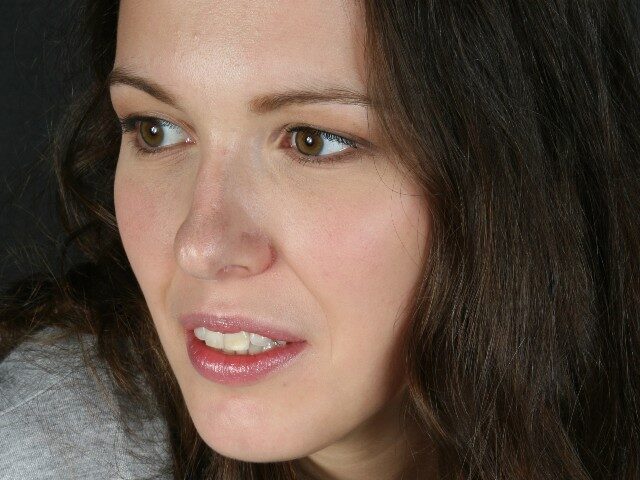 The show tells the last three years of Etty Hillesum’s life (1914-1943), a Dutch woman deported and murdered in the Auschwitz concentration camp at the age of 29. A non-observant Jew, Etty Hillesum grew up in a family of intellectuals and was educated in Amsterdam in law and Slavic languages, then held an administrative job with the Jewish Council. At the outbreak of the Second World War she worked in the Westerbork transit camp as social worker for prisoners, until she also became a prisoner of the camp. Shortly thereafter, on September 7th 1943, she was deported with her family to Auschwitz, where she died a few weeks later. The last three years of her life where recorded in a diary (1941 – 1943) and letters (1942 – 1943), through which Etty Hillesum is both a chronicler of her inner life and a witness to the Holocaust. Her diaries and letters, published in 1980 by the Dutch publisher Gaarlandt, were the starting point for Marina Corradi, a journalist and writer who scripted the play “Etty Hillesum. Cercando un tetto a Dio”. We talk about it with Angela Dematté, an actress who plays the role of Etty Hillesum in the performance.

How did this show come about?
The show was born in 2007, when Andrea Chiodi (director) and I came to know Etty Hillesum through the publication for Adelphi of part of her diary and letters, being immediately very impressed. At that time we also met Marina Corradi, a journalist who puts a very deep human vision into what she writes; she also read the diaries and letters and she immediately empathized with Etty Hillesum. Therefore, Marina developed the adaptation of the diaries and letters which we bring on stage.
After the debut in 2007 and a substantial tour, we have brought on stage this play every year, and not only in the period when we commemorate the Holocaust Memorial Day: Etty Hillesum, in fact, is not only a witness to the Holocaust, but also a passionate woman with many internal contradictions whose inner story we evoke. The starting point, indeed, is a personal diary and not a closed dramaturgy; the adaptation maintains the openness typical of diary writing.

What does Etty Hillesum’s private diary reveal? What kind of person was she?
She was a woman who took her interiority seriously, and who looked for the root of her desires. For instance, I often talk about the play with high school boys and girls, who are very impressed by her relationship with desire, with the masculine; Etty was full of questions about how to handle her desiring part. Moreover, she was an extremely free woman who knew no censorship: she experienced emotions very strongly – fluctuating among moments of euphoria and sadness – in a difficult historical period. A passage in her diary reads: “Yesterday I was walking down the street and I thought that if a bomb had hit me at that moment, it wouldn’t have made a difference; not living is easier than living”; Etty didn’t censor death impulses in a context of war and persecution, something we might perceive as uncomfortable and politically incorrect.
She was thus doing work on herself that did not discount anything; she left nothing unresolved. She needed the diary to explore her soul, to look at it from the outside – as is often the case with writing -, to look at what was happening to society of her time. In this way, Etty enables us to enter the soul’s complexity, something that makes her a real woman and not a character: a woman with contradictions which make her close to us, as we all have them. I would add that Etty dreamed of becoming a writer and thanks to this diary she became one, though without knowing it.

What are the relationships from Etty’s life that are told in the monologue?
The monologue is a dialogue with oneself, in which questions are posed to parts of oneself, about oneself and what one is experiencing; in this sense, relationships helped Etty to deepen the knowledge of her soul – very deep relationships developed in a context of war and persecution. An important relationship was the one with Julius Spier, an analyst who introduced her to the writings of Rilke, St. Paul – especially the letters on charity – making her discover a spiritual part that Etty cultivated and that transformed her, making her achieve a deep inner tranquillity. It is something mysterious and difficult to understand, but also to play as an actress; when I’m on stage, I try to “pass her on”, I hope to be able to understand her and get close to her. Yiddish songs played during the performance help to evoke the spiritual part, remembering Etty’s Jewish roots.

Etty’s diary and letters are a direct testimony of the Holocaust. She knew and she could have escaped, but she chose to stay and risk her life. Why?
Etty worked for the Jewish Council, an institution in which Jews decided how to manage the community and departures for the Westerbork transit camp. Etty obtained a position on the Jewish Council because she was part of the local “intelligentsia” and for that reason she felt so guilty that she could no longer accept her privilege. In the meantime, indeed, the process of inner transformation and openness to a Christian outlook was developing in Etty: following the process of her soul with a spirit of total freedom, day by day, Etty understood that she couldn’t escape, but rather that she had to live the same reality as friends and acquaintances – with whom relationships had become rarefied, not in the sense of neglected, but denser, more connected to life and death.
We should remember, however, that at the time people did not know exactly what was going on beyond the Westerbork transit camp: trains were leaving loaded with people who then didn’t come back, so one sensed that things could turn out very badly. It must also be remembered that while accepting the circumstances, Etty fully experienced fear. Often, when looking from the outside, a person like Etty Hillesum could be perceived as a holy person, someone statically holy, when in fact it is a step-by-step developed process in which emotions are fully experienced – and, only at the end of the process, do we get to be able to say “this life is wonderful, my heart has opened up” under any circumstances.

Today we live in relatively uncertain and dramatic period in history. What is Etty Hillesum’s message for us?
I think there are two. First, to be listening to the self, for it is in the depth of the self that peace and truth are found; moreover, if one enters within oneself as Etty did, then one can have meaningful conversations with everyone. Second, realise the futility of hatred. I quote her words in a dialogue with her friend Klaas: “Nothing is accomplished by hatred. Reality is different from how we imagine it. Look at our assistant: I see him often in my thoughts, his straight and stiff neck strikes me. He hates our persecutors with a hatred that I suppose is justified, but he too is a cruel man and he would be perfect as a camp leader. He would be a perfect executioner. Yet, even for him I feel pity”. We must stop the hatred: although it is right to hate those who persecute us, every atom of hatred we add to this world makes it even worse: “The earth can become more habitable only with that love of which the Jew Paul wrote to the people of Corinth”, that is, charity.