Aulos is the classical music festival of the Divisione eventi e congressi, which has been offering chamber music concerts since 1998. Aulos this year offers three concerts on Sunday mornings in August in the setting of the Boschetto Parco Ciani. We talk about it with Lidia Giussani, who oversaw the programming.
4 August 2022
—
by Silvia Onorato
Save in favorites
Saved 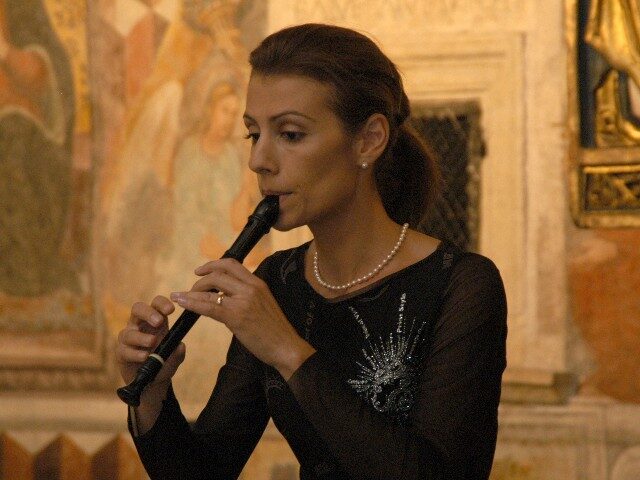 Aulos was born under the initiative of the Associazione per la Diffusione della Cultura Musicale (Association for the Diffusion of Musical Culture), with the purpose of giving space to young musicians at the beginning
of their professional career. For twenty years it has been becoming a festival of chamber music, with musical and matinées afternoons. The festival’s events, at the beginning happened at the Sala Ex Municipio of Castagnola, have moved during the winter months first to the Foce and then in the summer programme at Parco Ciani since 2016. A festival that aims to be a meeting point and at the same time to offer a trip through musical time, according to the spirit of Hausmusik that originated from the people’s desire to gather around music to create bonds and friendships.

A name that sounds classical for a classical music festival. What is Aulos?
The festival was born more than twenty years ago thanks to the Ufficio Attività Giovanili (Young Activities Office) with the name Associazione per la Diffusione della Cultura Musicale (Association for the Diffusion of Musical Culture), a technical and demanding name that was immediately changed in “Aulos”: a poetical name which designs an ancient Greek wind musical instrument. Born as a festival with the purpose of giving space to young musicians, over time it has become a chamber music festival tout court, which in each edition has at least one youth representation.

The quotation of the year is by Sergej Rachmaninov, which starts like this: “Music is a calm moonlight night, the rustle of leaves in Summer. Music is the far off peal of bells at dusk”. Aulos has taken place at Parco Ciani since 2016. What is the added value of playing and listening to music in nature?
Being surprised: having the ability to make space within oneself, around oneself, to be silent to welcome what is communicated by the external environment, by the musicians and their musical instruments. By quoting an expression I read a few days ago, I don’t remember exactly where, “a musician uses his heart, mind and two hands to express beauty”. I think that being surrounded by nature, instead of in a concert hall, changes people’s soul and their predisposition to welcome music; indoors people react in a certain way and enjoy the sound and musical finesse in a focused way, outdoors everything changes and people are stimulated from the external environment. Well, external sound elements take over, linked to nature and everyday life; sometimes positively intertwined with music, sometimes they are small disturbing elements which don’t clash.
I also love the continuation of Rachmaninov’s quote: “Music comes straight from the heart and talks only to the heart: it is love”. In my opinion, this contains everything.

The first concert, which launches this year edition, is by the Duo flauto e arpa (Flute and harp Duo) on 7 August. A programme from folk to tango, from opera arias to the movie repertoire. Who will be the protagonists?
Matteo Salerno (flute) and Monica Micheli (harp) propose a pleasant programme which ranges from various music genres, taking inspiration from different places and cultures; from the variations on ancient English folk melodies up to present day with a reinterpretation of the most famous themes of the Italian movie repertoire with Ennio Morricone’s masterpieces. We will have the opportunity to listen to excerpts from Rossini’s La Cenerentola (Cinderella) and then from Bizet’s Carmen and La Traviata from the world of opera; the final among Piazzolla’s dancing notes.

On 14 August, the second concert by the Ensemble Courante offers a trip to Vivaldi’s Venice.
The concert will lead you to Venice, La Serenissima, making us taste the amazing music of Antonio Vivaldi, the story of part of his life and of Chiaretta, who was one of his students. The story is told through Vivaldi’s music and the puppets theatre, with marionette, the reciting voice and the musicians who, with their instruments, accompany the human and musical story of the protagonists in real time. It will be the Ensemble Courante, composed by seven musicians (Refael Negri violin and direction, Katia Toselli violin, Mattia Tallarini viola, Michele Tagliafetti cello, Alberto Chiari harpsichord, Lidia Giussani recorder, Raffaele Benedetto bassoon), a reciting voice (Luisa Ferroni) and a puppeteer (Nora González) to accompany us on a wonderful musical journey.

The final concert will take place on 21 August by Tuscan Guitar Duo: 12 strings for a rich programme among Baroque and the XX Century.
For the final concert, we invited a young group, formed by two very young guitarists graduated to the Conservatorio di Lucca, Gabriele Lanini and Chiara Festa. With two classical guitars, therefore 12 strings, they will offer amazing music, including the famous Goldberg Variations, of which they have recently made a record. Beautiful musical creations, for two guitars, including pieces by Castelnuovo Tedesco and Rodrigo.

Aulos is at Boschetto Parco Ciani in the summer season context of Lugano, with three Sunday concerts in August at 10:30.
Learn more: luganoeventi.ch