Blues To Bop is the longest blues festival in Switzerland, taking place in Lugano from its very first edition. This year it will liven up squares in the city centre, on the last week end of August, from 25 to 28 August. We talk about its history and its guests with Filippo Corbella, artistic director of Blues To Bop.
23 August 2022
—
by Silvia Onorato
Save in favorites
Saved 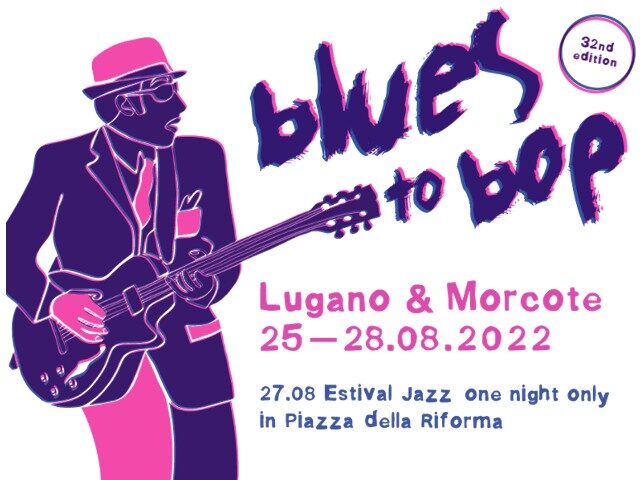 Blues To Bop counts 32 editions. What are the festival’s features that have been strengthened over the years?
The Italian part of Switzerland is the region with the most festivals dedicated to blues, each of them has its own specific feature. In our case, Blues To Bop has increasingly diversified itself, over the years, from the others, highlighting traditional blues, blues’ roots and American blues.

Four nights of music, from Thursday 25 to Sunday 28 August. What will they be like?
According to tradition, Blues To Bop follows the 3x3x3x3 formula (three artists, over three days, in three squares, namely Piazza della Riforma/Piazza Cioccaro/Piazza San Rocco, on three stages) and it presents artists of the international, European and Swiss scene. The first two nights are on Thursday 25 August from 19:30 and Friday 26 August from 20:00. On Saturday 27 August we will host a special Estival Jazz night in Piazza della Riforma, while the blues programme will continue in Piazza San Rocco, Piazza Cioccaro and in Piazza Granda in Morcote (a free shuttle bus service will bring the public from Lugano to Morcote). The grand finale will liven up Piazza della Riforma on Sunday 28 August from 18:00.

Blues to Bop will propose not only concerts but also talks with musicians.
In 2019 we created a round of meetings named “Blues to Bop Schools”, which were very much appreciated by the public. During these meetings the artists tell about themselves, their lives, their experiences and the audience can interact with them, ask questions and discuss. For instance, in 2019 Vanessa Collier, after telling her story, gave a wonderful short saxophone lesson to children, to whom we distributed kazoos (which in the milieu is called the poor man’s sax).
This year we will meet Toni Green, an exceptional singer and a committed preacher for women’s and black rights, while Vasti Jackson will introduce us the history of the blues through the guitar.

Many international and local guests. Who are they?
This year we chose to put side by side genre legends and new generations. The hosts, as usual, are artists active in the global blues scene. Starting from Bobby Rush, winner of two Grammy and fourteen Blues Music Awards and since 2006 present in the prestigious Blues Hall of Fame, passing to the iconic Toni Green, grew up in Memphis during the big expansion of the blues and soul music. She published her first albums with the Hi records, one of the most historical label of the genre. Vasti Jackson, a blues guitar legend, has worked with artists such as the timeless Tina Turner. Nikki Hill and King Solomon Hicks represent the new generation: musicians with personality like King Solomon Hicks, who  respects the blues tradition, while Nikki Hill veers more towards rock. Nikky D & the Sisters of Thunder represent the genre that cannot be missing in a blues festival: Gospel. Power and joy are their dominant features. Egidio Ingala and Roberto Testini are the frontmen of two bands which are very esteemed in neighbouring Italy (The Jacknives and The Blues Swingers). Lilly Martin and Marco Marchi, on the other hand, are two home-grown elements of the line-up: respectively both with a Swiss Music Award (Lilly) and a nomination for the Swiss Blues Award (Marco) and several appearances at international festivals bring us a Classical Blues and Roots Blues.

Where will Blues To Bop take place?
The locations are the town squares (Piazza della Riforma, Piazza San Rocco, Piazza Cioccaro), the Darsena of Parco Ciani for the Schools and the Piazza Granda in Morcote.

The 32nd edition of Blues To Bop is from 25 to 28 August, with free concerts every night in the main squares of Lugano.
More information: luganoeventi.ch/en/blues-to-bop