“It takes talent to grow old without becoming an adult” – Interview with Sonia Lenzi, photographer and visual artist

The photographer and visual artist Sonia Lenzi will present her latest photo book at the Studio Foce on November 23rd. “Looking for my daughters. Un libro di amore e di paure” (“A book of love and fears”) portrays young women encountered along the Regent’s Canal in London.
15 November 2022
—
by Silvia Onorato
Save in favorites
Saved 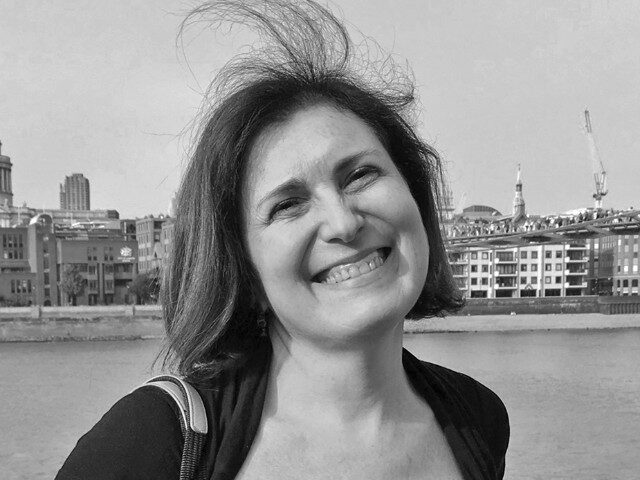 Sonia Lenzi, graduated in philosophy, art and law, investigates themes such as identity, memories of people and places, mortality and gender in an interdisciplinary way. She uses photography to investigate, establish and recreate social relationships through signs, symbols and gestures. Her photographic projects have been displayed in Italy, in the United Kingdom and in the United States of America. She lives and works between Bologna and London. The English capital is the background of her latest photo book, in which Sonia Lenzi portrays the young women she met while walking along the Regent’s Canal. Her gaze is that of a mother who sees her daughters becoming adult women, in a period characterized by numerous social changes on a global level.

What was your starting point in the conception of your latest book?
I would say the desire to reconnect with my daughters through young women of their own age, whom I met by chance along the Regent’s Canal and London waterways. Moreover, the idea of establishing a dialogue with all the young women who could be my daughters, our daughters, to get to know their lifestyle, their expectations, anxieties and fears. We live in a world where the relationship between parents and children is increasingly complex. The gender gap is also widening due to climate change, geopolitical transformations, pandemics and wars. It is also happening in Europe and in the USA, where the model of democracy seems to have entered a crisis and civil and women’s rights are being questioned.

Your book investigates the transition to adulthood. In the past this transition was clearer; in your opinion, what marks it nowadays?
I think the transition to adulthood is very fluid today, and one remains a teenager for a long time. If I’m honest, I myself do not feel fully grown up yet either. It takes talent to grow old without becoming an adult, sing Jacques Brel and Franco Battiato. Actually, the difficulties the younger generations, especially women, are facing are also ours, and an intergenerational pact can help us to grow up together.

The background of the book is London. What kind of city is it, for you?
London is a fascinating and still Dickensian city, in some respects, now stunned by Brexit. A multi-ethnic and multi-cultural metropolis, a crossroads of trade and also a reference point for many artists, a complex city with which I have many ties, one of my favourite places.

Why did you choose Regent’s Canal as a landmark? What do the many young women you met there have in common?
Regent’s Canal is an important meeting point, especially around Camden Market and Granary Square. King’s Cross, where this square is located, is adjacent to the canal and one of the most significant urban regeneration projects in Europe. From being a commercial hub and then a run-down area, it has been transformed in a centre of aggregation, especially of young people and students attending Central Saint Martins, a renowned college for the arts and design. The young women I met all along the canal route are all different. I called them Jane and Mary, two fictional but common names, because they could be the daughters of us all.

What are the differences with your hometown, Bologna?
Bologna is a man-sized town, or rather a woman-sized, that you can almost completely cover on foot within the more recent city walls. Bologna is also a cultural hub, home to the oldest university in the western world, a gastronomic centre of excellence, a city of water, like London, although the canals are now mostly hidden. One feels protected in Bologna, by the porticos and people who walk along them or stop in the cafés and small bars. In London everything is big, majestic, there is the Thames, extraordinary parks and magnificent museums where you can spend the day.

What are your next projects?
I’m working on several projects for 2023, two of them here in Lugano with Artphilein Foundation. The first is an exhibition of photobooks related to “Looking for my Daughters”, as in a way these are the books I would recommend to hypothetical daughters, as a tool for reflection and understanding of our private, the personal and the public, political dimension. A woman, Anna Atkins, was the first who published the first photobooks in 1843, “Photographs of British Algae: Cyanotype Impressions” and the book is often part of my artistic and photographic practice, as it can always be carried with me and is a democratic tool for disseminating culture. The other project is related to home, to living and unlike the previous one “Take Me to Live with You. A Social family Album” – published with Kehrer and exhibited at Blue Sky, the Oregon Centre for the Photographic Arts, about people who could have been my parents and welcomed me into their home like a daughter, amidst books and, often, antique furniture – it will be on a burning theme: that of homelessness.